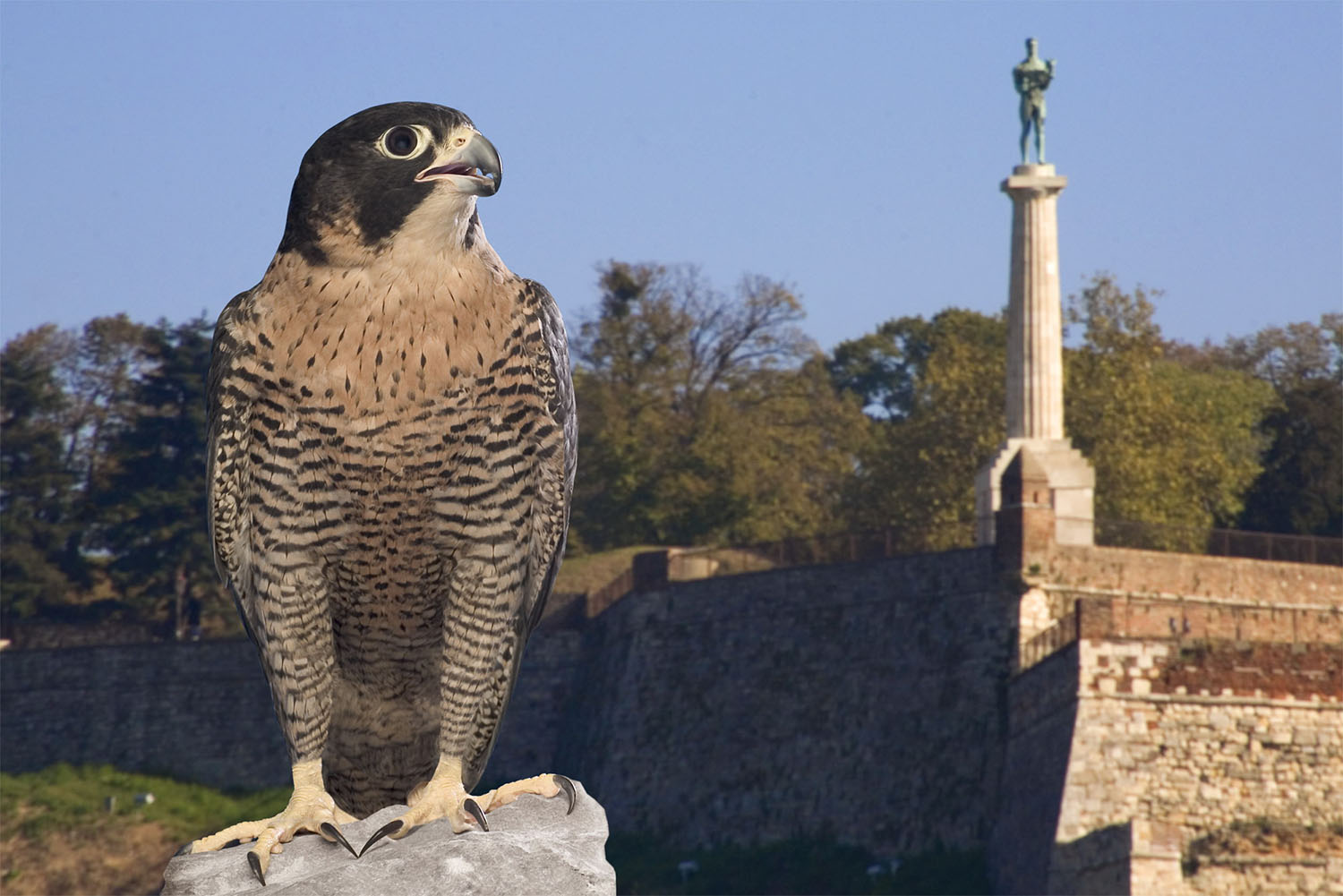 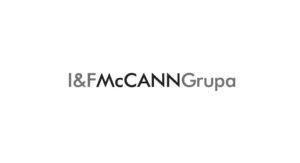 Few Belgraders know that there are two species of falcons nesting in Belgrade. The ancient deity Horus,
a symbol of victory and infinite freedom, a peregrin falcon Falco peregrinus has found itself on the hand
of the Victor in the Kalemegdan Park and has become a symbol of the city of Belgrade. While a large
number of species are going extinct, peregrin falcon and common kestrel have adapted to the Belgrade
noise and crown, and have accepted to share their living space with us. We can also share our living
space with falcons, the species that have agreed to make nests on our balconies. Belgraders rarely look
up at the sky, thus missing out on the perfect flight of top urban predators while sitting in Belgrade
parks, waiting for a bus or simply while looking out through their windows. Although the peregrin falcon
is a protected species, pigeon breeders haunt it and for this reason we are not giving away the locations
of its sighting. 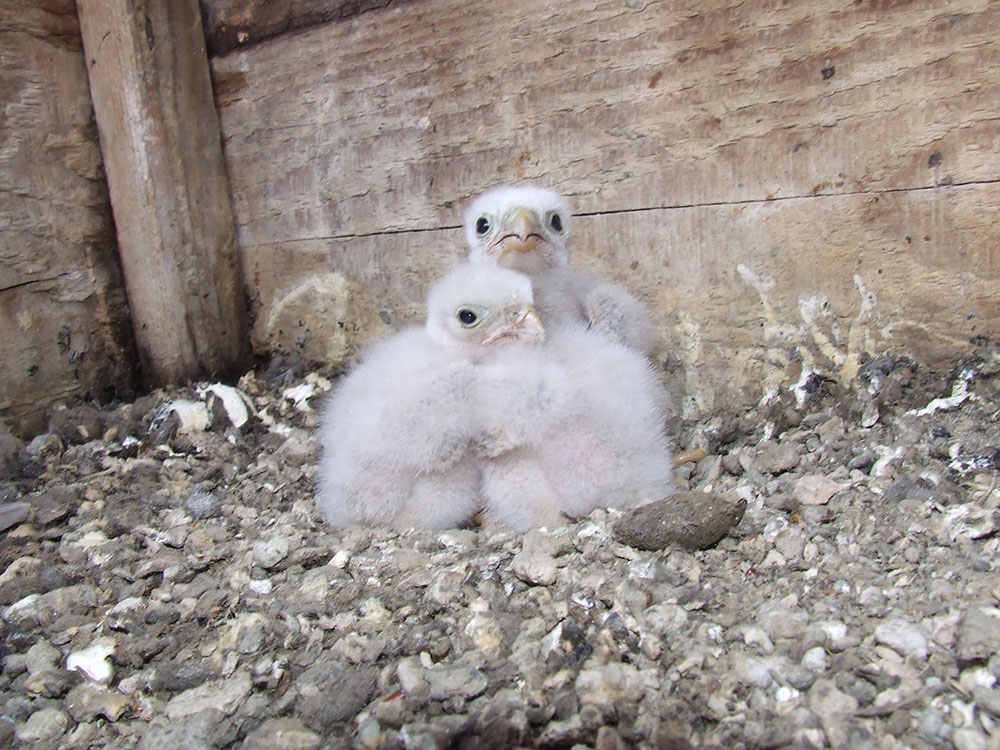 Do they nest on your balcony as well?

Increasingly less available food in nature has forced these species to come and adjust to urban
settlements. Scattered waste constitutes ample source of food for rodents and pigeons that procreate in
urban areas apparently limitlessly. This large source of food attracts predators into towns where they
play their predatory role in the selection of the catch.

During two decades of monitoring in urban and suburban areas covering 108 km2, we have marked
around 300 nests of common kestrels in Belgrade. The number of active couples varies between 130 and
180 depending on the year. The average population density in Belgrade is 1.6 couples per square
kilometre. In some parts of the city there have been no nests observed, while at some high-rise buildings
in Vidikovac, Zemun and Novi Beograd they nest in groups up to 9 couples separated only by different
floors. On an average, common kestrels annually eat up to 13 tons of rodents and lizards in Belgrade. By
leaving space for the placement of nests when designing high-rise buildings, it would be made possible
that these zealous cleaners of Belgrade do their “job” more ardently. Birds of prey accumulate hazardous

matters from their habitat through their prey, thus being indicators of the quality of the environment
and the consequences of pollution. They are the first to show adverse consequences of different
pesticides and heavy metals, as they are more sensitive to them than mammals. Presence of birds of
prey is a sign that we live in a relatively un-polluted environment.

Falcons do not build nests, but rather they nest in holes in facades, concrete jardinières and ventilation
pipes. Their nesting starts at the end of April and they lay eggs until June. They may lay up to 6 eggs, 4.5
on an average, and the eggs incubate over a period of 27-29 days. On an average, they raise 4 chicks that
start flying after 27-32 days. The entire cycle takes 60 days. They may create problems with their high-
pitch screeching which they use to greet one another and which wakes up people at dawn. If we want to
preserve the diversity of life we have to accept that others also share their living space with us. Common
kestrel is a rare bird of prey that has managed to adapt to our urban spaces where it is even more
successful than in its natural habitat.

Students of the Faculty of Biology monitor common kestrels in Belgrade. They mark nesting sites,
number of eggs and number of hatched chicks. The chicks are ringed by a coloured tag in order to
monitor birds from different parts of the city. Common kestrels are resident birds, so ringed specimen
are usually found around the city. However, a common kestrel from Vidikovac was found in Tunisia the
following winter at the distance of 1230 km, while another one died near Naples (Salerno in Italy) 633 km
away. 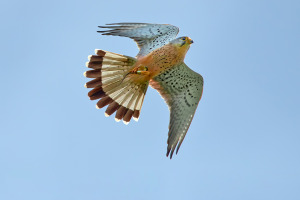 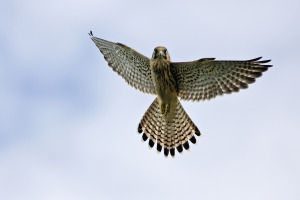 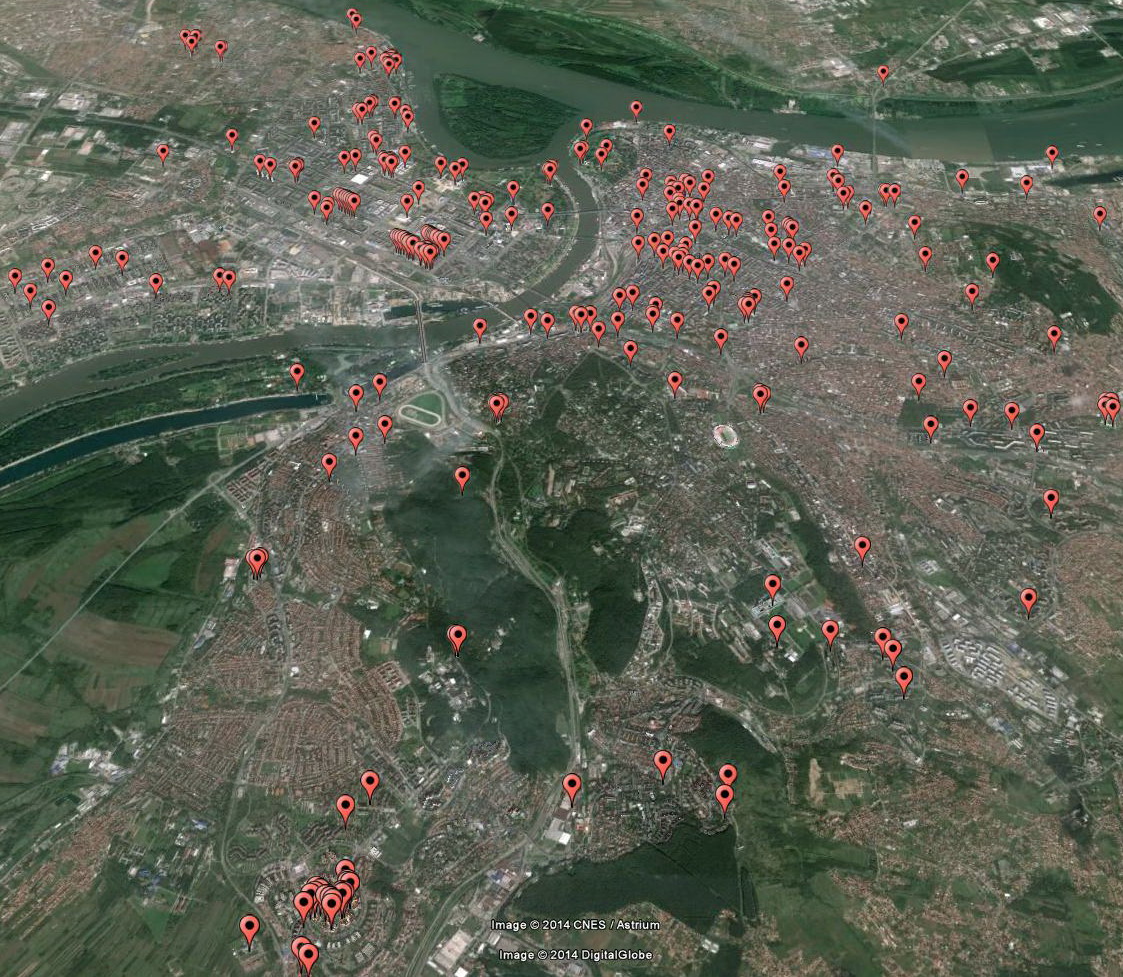 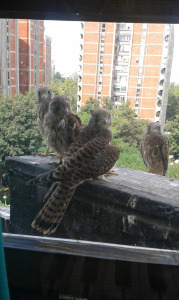 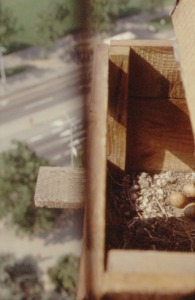 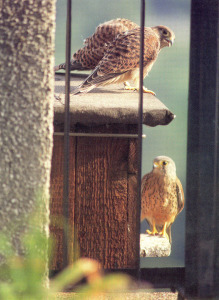 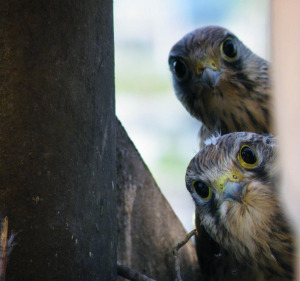 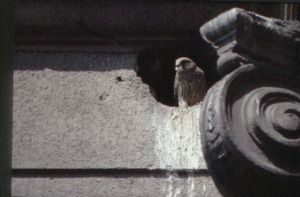 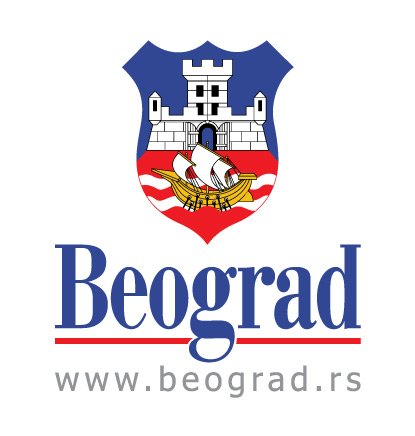